Recently, my father, who has a severe hearing loss, visited his dermatologist to have some skin cancer removed from the outside of his ear. After his appointment, his right ear was bandaged up and he was unable to wear his hearing aid on that side. His dermatologist told him to leave his bandages on for a week.
Two days later, my father had an appointment with his primary care doctor for a routine visit. Even though he was wearing his left hearing aid, he missed his name being called in the waiting room. The nurse had to walk over to him and stand in front of him to get his attention then motion him to the back. He told me that when this happened, he knew this was going to be a rough appointment for him.

In the exam room, my father’s doctor came walking in wearing a mask. My father knew his doctor was talking, but he simply could not understand him. His voice was very low and muffled under his mask and my father was simply unable to catch everything that was being said with only one hearing aid on. He explained what happened to him and why he couldn’t hear him too well. The doctor left the room for a few moments and returned with a pad and paper. At that point, my father’s appointment consisted of his doctor writing down words on the pad then holding it up for my father to read.

The next day, my father told me how his appointment went and my heart sank. But, then, a lightbulb went off in my head. Just the other day I was reading about an article regarding live transcribing apps for cell phones. I pulled out my cellphone, downloaded a transcriber, and briefly tested it out with him. His face lit up! “This would have been great to have at my appointment” he stated. He gave me his cellphone and told me to put it a transcriber on it.

On the patio that day, we had a lot of fun seeing how well the live transcriber worked for him. With his bandages on his right ear and only wearing his left hearing aid, he wasn’t able to catch everything I was saying to him when I put a mask on, especially with background noise present. Then, he held his phone near me with his live transcriber app open. Every word I said to him was displayed on his phone. My mother, who was a few feet from me, asked him what he wanted for dinner. My dad looked at his phone, read what she just said, and answered her.
With how the world is today, wearing a mask when going into a business is mandatory. This can make it very hard for those with a hearing loss to understand what is being said by employees. A live transcribing app can make things easier though. If you have an Android phone, go to your Google Play Store and search for a live transcribing app to download. If you have an Iphone, go to the App Store to search and download a live transcribing app. Most of these types of apps are free and are extremely simple to use. 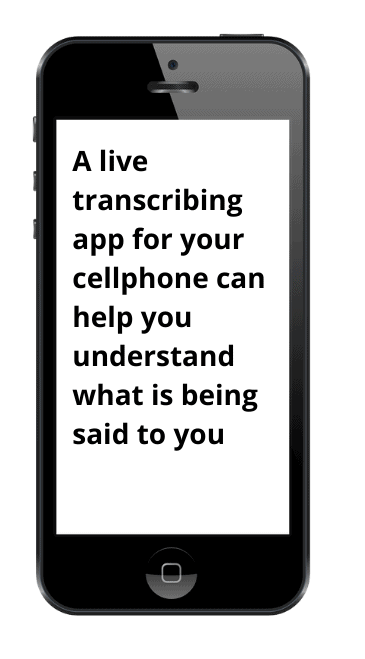